Everything you want to know about Sushi... 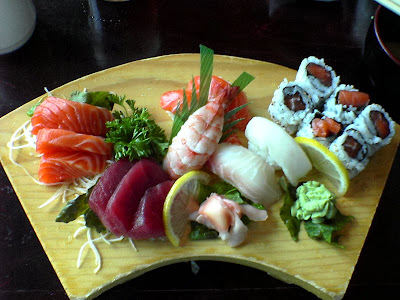 Everything you want to know about Sushi.... and then some...

The "How-To" of Sushi making is varied according to who is telling the story.  As in every kind of cooking Every "Sushi Chef" has their own style of making and presenting Sushi.  There is no real set of rules for making sushi as in all cooking.. but there are some guidelines that one should follow in order to come up with something that can be considered good sushi.

These are some of the basic ideas and ingredients for "Good Sushi".

The amount of variety in Sushi ingredients makes it nearly impossible to create a complete list of all of them here or anywhere in one place. This is only a basic list of the ingredients normally used to make sushi in one's own kitchen.


Sushi rice
•Rice for sushi has to be glutinous (sticky) and should be short or medium grain. Most Japanese style rice available at grocery stores will suffice. I've been using Nishiki lately and I like it quite a bit.  However Cal Rose Botan is less expensive and really works well too. You can use brown rice, but it takes a bit of practice because it's not nearly as sticky as white rice.

•Wasabi found in most stores contains little or no real wasabi. It's usually mustard with green food coloring added. If you can find it, opt for real wasabi. It can be found in better asian food stores and online.

•Pickled ginger, it's used to clean the pallet between bites of sushi. Can be found in most asian markets and many grocery stores. Gari made in your own kitchen will be more authentic,

•Seaweed is used extensively in Japanese cooking and is used in most types of sushi. Make sure you buy enough of it, it's cheap and you'll make mistakes at first.

•Fish is the main ingredient in most sushi. Make sure if you're using raw fish that you select a good grade of fish. Ask the person at the counter where you buy your fish if he has any sushi or sashimi grade fish. He won't fib, he doesn't want to be liable if he sells you bad fish. Some places have fish pre-cut for you, some places make you cut it yourself. I would suggest for your first few times making sushi you stick to tuna fish in a can. You can make a simple tuna salad from it which is useful for both maki and gunkan style sushi, and if you ruin it, you're not out much financially.

Later, once you are more accustomed to making sushi, you might want to try with salmon and tuna. Where I buy my fish I have the ability to purchase pre-sliced fish which is great for nigri, such as tuna, salmon, freshwater eel, and mackerel.

•Most any sort of vegetables you want are acceptable in sushi. I often use avocado, baby daikon sprouts, cucumbers, and carrots in maki sushi. Leaf lettuce in a roll gives a nice ruffled appearance as it peeks out of the end pieces. For vegetarian nigri, you can use steamed asparagus or other stalky vegetables.


•Fruits can also be used in sushi. For a slightly sweet dessert, try making apple or kiwi sushi. Fibrous fruits lend themselves well to sushi, but more juicy fruits like citrus should be used by itself at the end of a meal for dessert.


Miscellaneous items used in sushi include eggs for omelet and fish eggs such as tobiko or masago, sugar and salt in preparing sushi rice, sesame seeds for the outsides of inside-out rolls or to add crunch to the inside of a regular roll, cooked chicken, cooked shrimp, imitation crab, cream cheese, etc. Just about anything you can fit inside a roll will work, even if purists stick their noses up at it.

Check out these video's I found on the web as well... I thought they were pretty informative and followed my own style of Sushi Making...