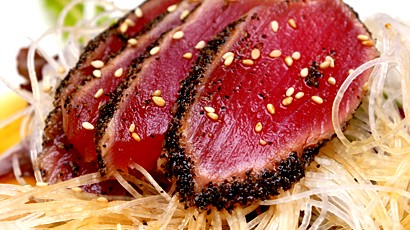 
While the French paradox -- a nation of cigarette smokers, cheese eaters and wine drinkers who are actually healthier than most other developed populations -- seems to make little sense on the surface, very few people are surprised to hear that the Japanese are among the healthiest in the world.


Japanese people enjoy one of the longest average life spans in the world -- 86 years for women and 79 for men versus 80 and 75 respective years for Americans -- with far lower rates of obesity and chronic diseases like osteoporosis, heart disease and some types of cancer.


Part of that success is a product of lifestyle. Japanese people tend to exercise more than we do, and part of it is due to diet. Not only do the Japanese eat healthier than North Americans do, their diet is made up of low-fat, high-carb and protein-rich foods that are loaded with all sorts of nutrients and antioxidants that our diets don’t come close to matching -- but they also eat less. The ancient Japanese proverb hara hachi bunmesays it best: “Stop eating when you are 80% full.” So, while our society glorifies terms like “supersized” and “all you can eat,” in Japan, foods are eaten slowly and in smaller quantities. In order to eat like the Japanese, you'll have to understand that meals are appreciated as much for their excellent taste as they are for their beautiful presentation. Not surprisingly, the Japanese eat about three-quarters of the calories per day that Americans do.


Lifestyle changes aside, there are a few basic tips you can follow to help you eat like the Japanese. It isn't particularly difficult and it will help change your diet for the better.
Eat more fish

Most people incorrectly assume that rice is the most common staple in Japanese cuisine. In fact, fish is featured much more prominently on the Japanese plate, so much so that the average Japanese person consumes more than 154 pounds annually (or about a half pound a day). If you want to eat like the Japanese, you better learn to like fish. The Japanese are so fish-mad that they collectively consume 12% of the world’s fish, but account for only 2% of the global population.

The health benefits derived from eating fish isn’t news to most of us. Fresh, cured, smoked, or salted, fish are loaded with vitamin A andomega-3 fatty acids that help to protect against various types of cancer.
Change the types of protein you eat

While we’re on the subject of meat, we tend to forget that meat is not the only source of protein out there. While modern Japanese people have started to incorporate more beef into their diets, traditional diets still focus on plant-based proteins, particularly tofu, which is low in saturated fat and rich in calcium.

Now, we’re not here to tell you to completely avoid red meat for the rest of your life, but consider the health benefits of eating plant-based proteins on a more regular basis. If you’re looking to eat like the Japanese, you might have to make the switch from the artery-clogging, saturated-fat-laden red meats to the much healthier plant-based proteins.
Eat your greens


Mom was right: Vegetables are good for you. Japanese people know it, but we persist on eating only those veggies that are deep fried or boiled to blazes, which causes their nutritional value to diminish.

The Japanese eat about five times the amount of cruciferous vegetables -- things like kale, broccoli, cabbage, cress, and radish -- than Americans do. Not surprisingly, these vegetables have been shown to be among the best at warding off some types of cancer, among them colon cancer, lung cancer and prostate cancer. And while most of us have horrible memories of mom’s overcooked cabbage, remember that it is actually possible to cook these vegetables properly to make them taste good. Try steaming or stir-frying them quickly, or roast root vegetables in the oven with a bit of olive oil, salt, pepper, and herbs.
Supplement your meal with rice


The Japanese eat six times the amount of rice that Americans do. So why is that significant? Rice is useful because it’s low in fat and high in carbs. It’s a mealtime supplement that helps fill you up with very few calories. And if plain white rice doesn’t catch your fancy, take things a step further and substitute with brown rice, which is made from whole grains and is loaded with good-for-you fiber.
Finish your meal with green tea


More than most, the Japanese love their green tea. Although some types of green tea have more caffeine than some black teas, the drink is loaded with all sorts of powerful antioxidants that help lower cholesterol andblood pressure. Green tea consumption has also been linked to lower incidences of stroke and heart disease.
Healthy desserts


It’s not always necessary to end a meal with dessert, but if you like to, think to eat like the Japanese. The idea here is to avoid heading straight for the chocolate cake, but rather to opt for a nice selection of seasonal fruits or sweetened bean paste. And when you do indulge in ice cream, do so in much smaller portions.
land of the rising life span


If there is one downside to eating a Japanese-style diet, it’s the level of sodium consumption. Japanese people tend to eat lots of pickled foods and flavor other foods with soy sauce, all of which are laden with salt. You can correct this by making a switch to low-sodium products, which are easy to find.

Spend a few weeks on the Japanese diet and remember to practice hara hachi bunme, and you’ll likely notice a profound difference in how you feel. It’s a great way to enjoy delicious, nutritionally balanced foods.