Why is most wasabi fake?


Real wasabi paste is made by grating the wasabi rhizome (stem),

When you grate wasabi the volatile compounds in it begin to break down within a few minutes so it has to be done fresh. Also the cost of real wasabi roots is quite high since its a rare and perishable commodity, on the other hand you have the fake wasabi powder which is cheap has a long expiration date.

Wasabi doesn't develop its distinctive flavor until
it becomes mature after about 24 months. During this time the wasabi will grow about two feet tall and two feet wide. It will stop getting taller and wider, and start putting energy into growing a long, carrot-like rhizome beneath the soil.

Rhizomes are mature and ready to eat when they're about seven or eight inches long.

First of all.. the Wasabi used for sushi is not really a root... it is a stem or rhizome of the wasabi plant..

Wasabi is generally sold either as a stem, which must be very finely grated before use, as dried powder in large quantities, or as a ready-to-use paste in tubes similar to travel toothpaste tubes.[4] Because it grows mostly submerged, it is a common misconception to refer to the part used for

wasabi as a root or sometimes even a rhizome, while it is in fact the stem[5][6] of the plant, with the characteristic pock marks where old leaves fell off or were collected.

In some high-end restaurants, the paste is prepared when the customer orders, and is made using a grater to grate the stem; once the paste is prepared, it loses flavor in 15 minutes if left uncovered.[7] In sushi preparation, sushi chefs usually put the wasabi between the fish and the rice because covering wasabi until served preserves its flavor.

Fresh wasabi leaves can be eaten, having the spicy flavor of wasabi stems.

Because the burning sensations of wasabi are not oil-based, they are short-lived compared to the effects of chili peppers, and are washed away with more food or liquid. The sensation is felt primarily in the nasal passage and can be quite painful depending on the amount consumed. 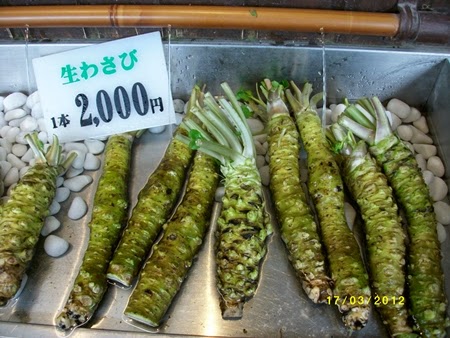